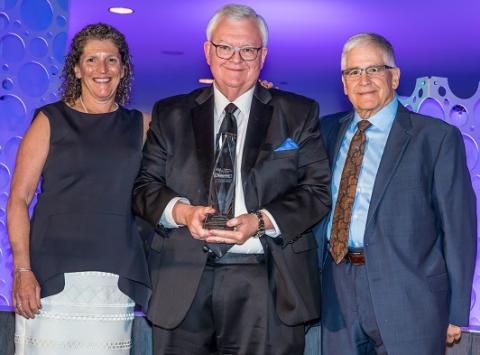 Wow. I don’t know about you, but for me, there are few pleasures that come across our professional lives that feel as magical as the good times we are sharing tonight. Even though Saint Cynthia could not join me here in Boston, I am still surrounded by family. Some of my very favorite people in the world are right here in this room tonight. And before you ask, we call her Saint Cynthia, because she has been married to me for more than 45 years…. enough said.

Founders, Board Members –both current and past, Award Winners, Respected Colleagues, and Supportive Guests --- I stand before you, humbled by this honor, with deep respect for all who stood here before me, and overwhelmed by the meaning of this recognition.  I accept the Steven G. Avey Award with tremendous appreciation for each of you who have allowed me to travel this professional journey - along my chosen path.

Please allow me a few moments to reflect on where I’ve been – where many of us have been.  This story is meant only to reflect on the magnificent historical expedition that we, the AMCP family members and supporters have taken, and while I will attempt to use accurate numbers along the way, facts are that I can’t guarantee each item since I collected them from various presentations and reports.

For me, it all began in 1972.  While a pharmacy student, I wrote a paper for my pharmacy business management course on the future, hope, and promise of the business model known by the initials “HMO.”  I still have that paper somewhere.  I will never forget receiving a grade of A with an added note from the professor stating “nice paper, but it will never work.”  So, now I ask you, what inspired your career?

Jump to 1988 – eight very smart, very courageous pharmacists joined together in mind and spirit to create this professional organization – OUR organization – for managed care pharmacists.  The first meeting was held at the ASHP meeting in Nashville.  Of the 135 attendees, 50 joined this new organization.  The next four years saw a small army of managed care pharmacists being recruited as charter members who adopted bylaws, established visions, officially incorporated, and set the plan into motion by holding their first official, independent national meeting.  In 1989/1990 there were 103 members, and by 1991 it was up to 634 members – pretty nice growth.

Among all of the layers of growth that took place over the next few years, I would like to call out three milestones that I believe are forever important to the Academy then and now.  First, one of the most noticeably critical accomplishments was being accredited by the American Council on Pharmaceutical Education (ACPE) in 1995.  We pharmacists need our CE…!  Second, another major milestone during this era was the creation of the Foundation for Managed Care Pharmacy (FMCP).  And Third - extremely important to me and others, was the establishment of the Journal of Managed Care Pharmacy.

Let the record show we are now up to 1288 members.

Moving on, from 1996 through 1998, AMCP witnessed tremendous growth and new success including such items as:

-  Founding of the first seven AMCP student chapters (now, we have 76)

-  plus numerous educational and informative programs and newsletters

AMCP turns the corner racing into the decade of the 2000s.  Although I won’t get these in the right order, here are some of the memories that I have of this era – maybe you do as well – I think about all of the Where We Stand publications that we created to tell our stories  -  The Corporate Member Council was formed  -  Managed Care Residencies were accredited  -  the magnificent Format for Formulary Submissions methodology was put into place  -  Affiliate Chapters were born including our own Texas Affiliate which later morphed into the Southwest Affiliate. Today, we have 7 affiliates plus associate agreements with 7 state pharmacy associations.

And let’s not forget… Babette Edgar and I got hoodwinked into going to CMS.  You heard about Medicare Part D - right?  Just to be clear, open, and honest, Babette was the brains of our duo --- I was simply there as another pretty face.  Seriously, not only did all of us engage in the most intense series of months to create the highly popular and successful Part D program, but we members of AMCP used the opportunity to create the Guide to Pharmaceutical Payment Methods; Sound Medication Therapy Management Programs versions 1.0 and 2.0; and a whole host of research publications.

2013 saw a significant change to the AMCP bylaws making any pharmacist, physician, nurse or physician assistant who is licensed in the U.S. eligible for the Active Member category within AMCP’s membership.  This change made those members eligible to vote, serve as committee chairs and members on all committees, and to hold office on the AMCP board.

The Foundation’s name was changed in 2013 from the Foundation for Managed Care Pharmacy to the AMCP Foundation.

Partnership forums in their current format begin in 2013 and have yielded many important AMCP initiatives.

The Biologics and Biosimilars Collective Intelligence Consortium (BBCIC) was approved by the board in 2015 and is now an active research consortium conducting research on the safety and efficacy of biologics and biosimilars.

Healthcare – Managed Care – Patient Care - all are again on the edge of radical transformation.  Orphan drugs; Gene therapies; too few effective antibiotics; too much opioid addiction; Medicaid Managed Care; integrated delivery networks; new models of care in risk-sharing arrangements;  and an ever increasing population of Medicare eligible men and women surround us.

Some see things to fear – I see opportunity; I see an ever growing need for stronger, smarter, speedier implementation of managed care skills and tools including a need for additional research – evidence to help tell our stories.

What do you see? How will you engage? Believe in yourself as I believe in you. And, believe in the youth that you will mentor today to lead tomorrow’s success.

To close: As I said to begin my comments, WOW.  I am so honored to be receiving this award, from you – my family – my friends – my colleagues.  If I don’t count that Saturday afternoon last month that I spent with my grandkids at a place called Monster Warrior Kids, I cannot imagine any place I’d rather be than here at our AMCP spring conference.  And of all of the honors that I have been blessed with in my life, receiving the Steven G. Avey Award tonight – here – with you – will always be the one that touches me the most.